Bioclim is a so-called envelope-style method, which uses only occurrence data to define a multi-dimensional environmental space in which a species can occur. This environmental space is constructed as a bounding box around the minimum and maximum values of the environmental variables for all occurrences, resulting in a multi-dimensional rectilinear envelope. To avoid the overpredictive effect of outliers, the resulting envelope can be reduced at specified percentiles or standard deviations. 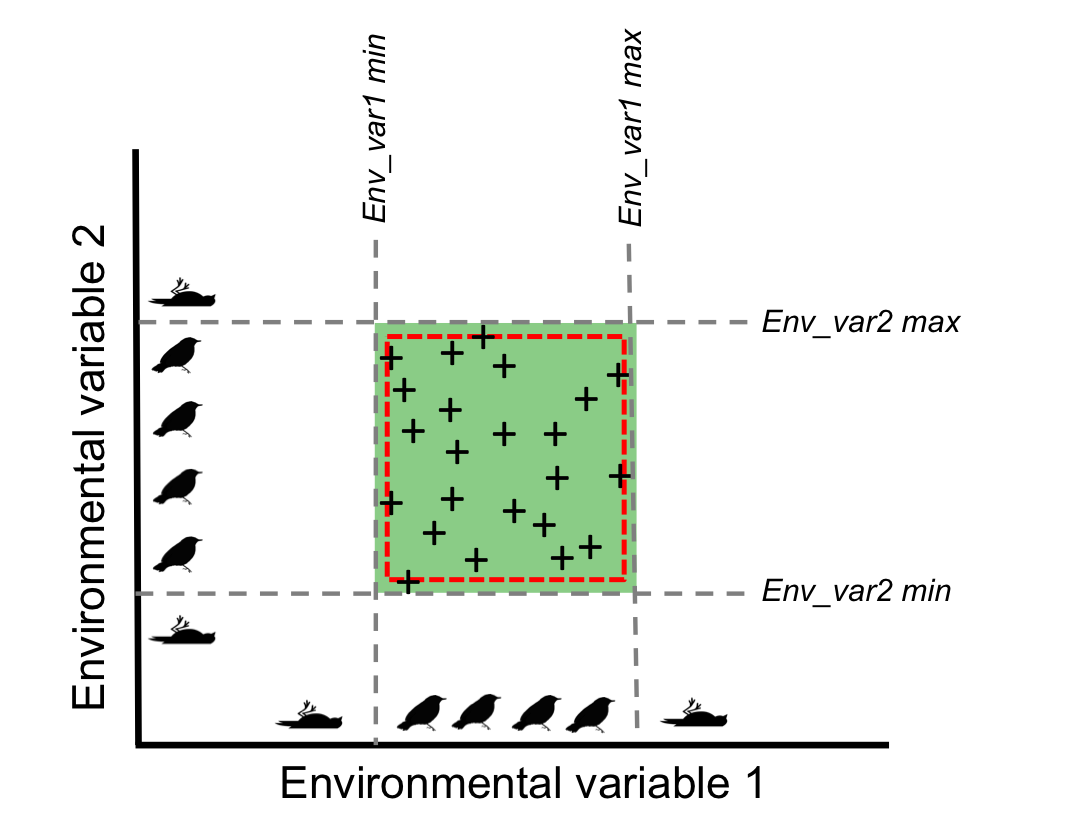 In the 'dismo' implementation that the BCCVL uses, predicted values larger than 0.5 are subtracted from 1 to transform upper tail values to the lower tail. Then the minimum percentile score across all environmental variables is used to obtain the overall score for an unknown location. By using the minimum across all variables, the model predicts that a species will only occur at sites suitable to the most limiting factor. The final score is subtracted from 1 and then multiplied by two so that the results are between 0 and 1. The developers of the 'dismo' packages have implemented this scaling to make the results more similar to other species distribution modelling methods and easier to interpret. Values of 1 will rarely be observed, as it would require a location that has the optimal (median) value for all environmental variables. Values of 0 are very common as it is assigned to all cells that have at least one environmental variable with a value outside the percentile distribution.

Bioclim was the first species distribution modelling package that linked spatially explicit species occurrence data with maps of environmental variables. It was developed in Australia under leadership of Henry Nix. The algorithm is still widely used, because it is easy to understand, but it is generally acknowledged that it does not perform as good as some other modelling methods.

Bioclim was mostly developed to model species distributions in relation to climatic variables, and thus assumes that species occurrence is influenced by climate at the scale of climate variables, and that these variables are normally distributed.

BCCVL uses the ‘dismo’ package. There are no configuration options for this algorithm.