Species distribution models, use both geographical and environmental space to predict a species realised environmental niche. Below we explore what these terms mean.

Looking at only one environmental condition, and plotting the probability of a species to occur in relation to that condition, the result could for example be a bell-shaped curve. This curve shows the optimum value of the environmental variable for a species to survive. For example, if the species is affected by temperature, the probability of occurrence is highest at the optimum temperature, with decreasing probabilities towards the minimum and maximum values that the species can tolerate. 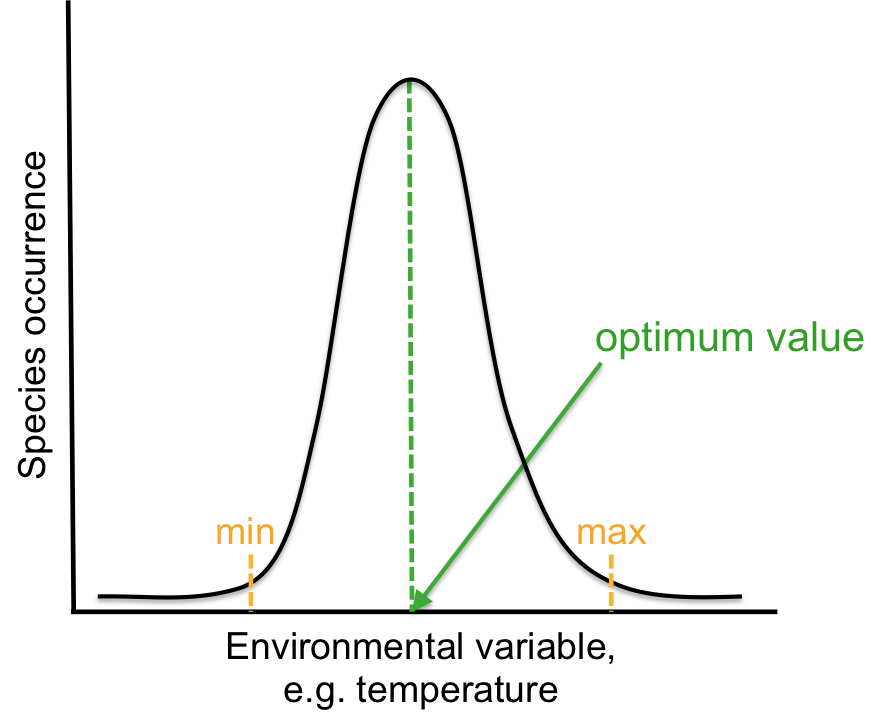 Add another environmental condition that is relevant for the species, and a two-dimensional graph is created, with one environmental variable on each axis. Each of these variables has its own optimum curve. The model will find the area where the combination of both variables results in the most optimum conditions for a species to occur. The centre of the circle represents the combination of environmental variables with the highest suitability for a species to survive. The gradient colour visualises a decrease in suitability of the environment from the centre of the circle outwards. 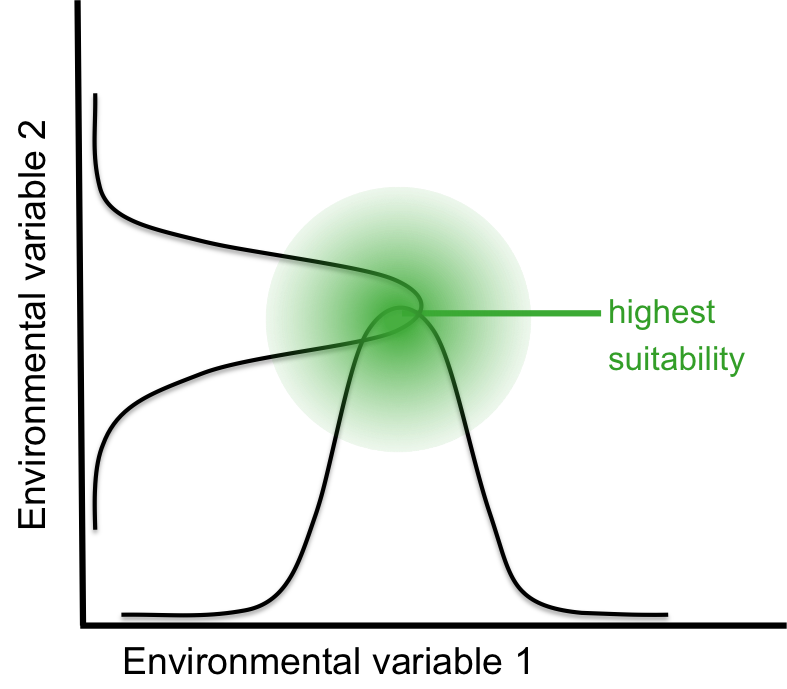 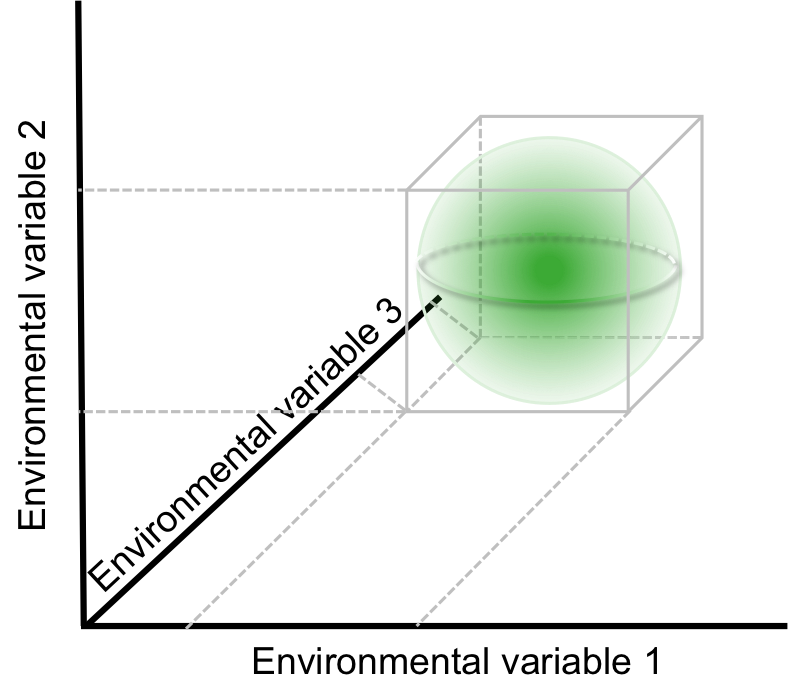 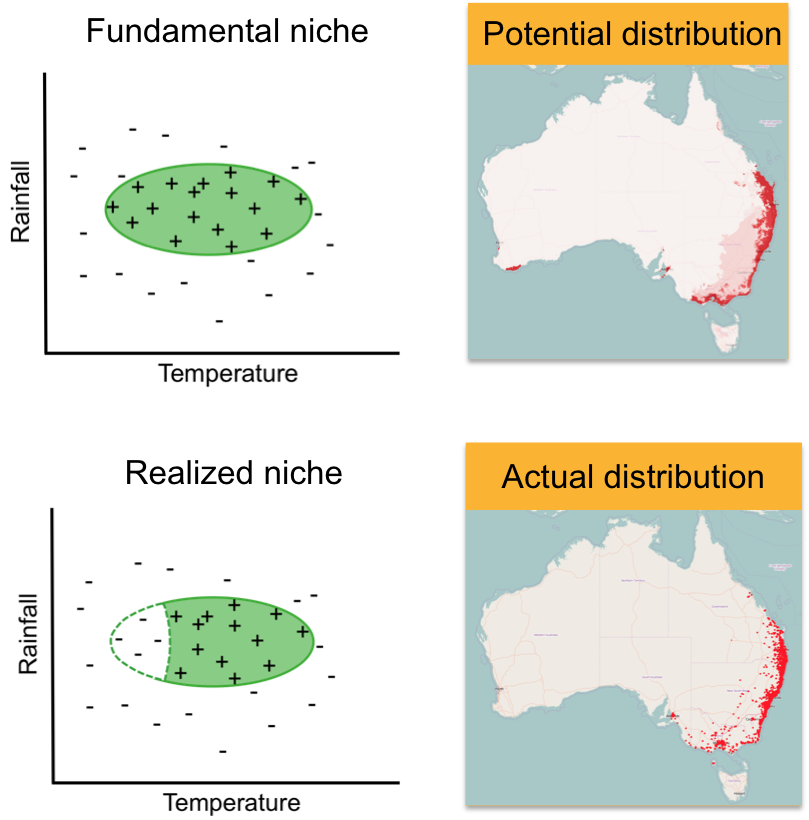 Two important factors that might affect the environmental niche of a species are:

Most algorithms, are designed to link the places of occurrences to the environmental conditions of those places, and thus function in environmental space. These models follow three steps:

Geographic models, however, are not based on the environmental conditions of occurrence locations, and as such the second step is skipped. 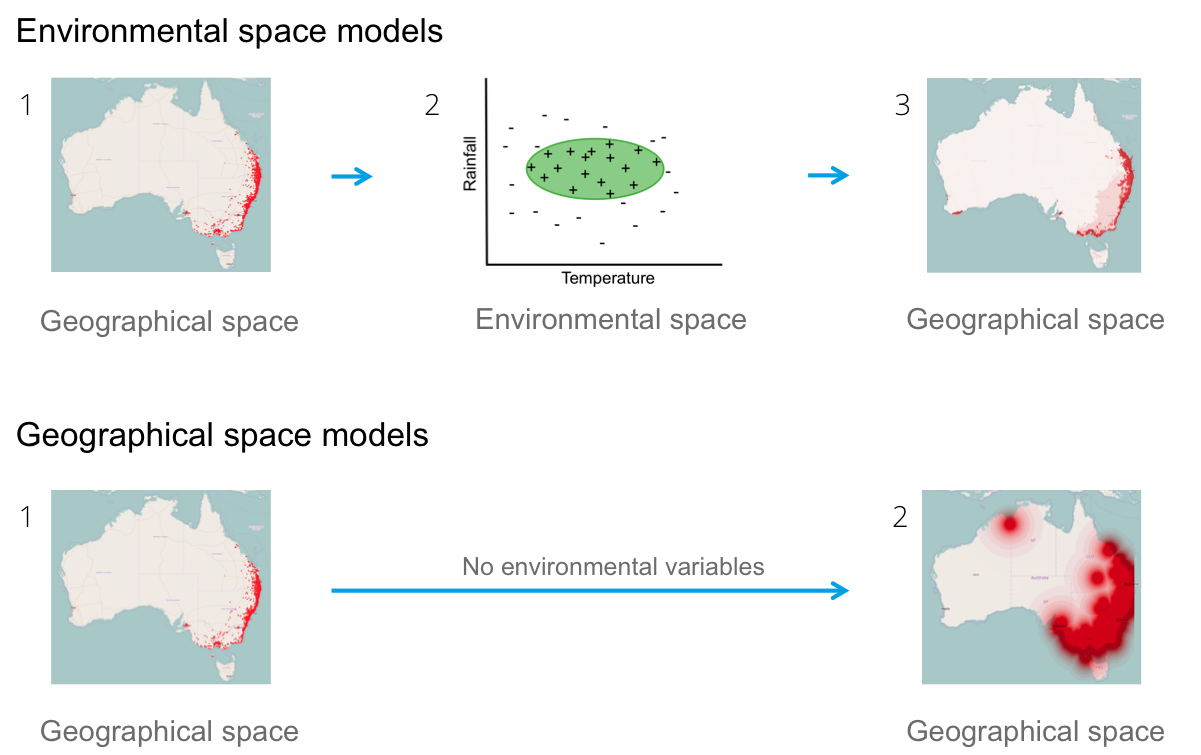 Once you have modelled your potential species distribution with suitable environmental variables, you can overlay the actual occurrence points with the modelled distribution on a map. This is useful to identify areas where a species is likely to occur, but just has not been found yet. Those areas where a species is not occurring, but where the environment is suitable for it to survive can be used, for example, to prevent an invasive species from spreading to an area where it has not been observed yet.

It is important to realise that it is unlikely that the occurrence records that exist for a species reflect the entire range of environmental conditions that a species can occupy. The species distribution models are only built with the data available, and are thus only calibrated with the environmental niche that is represented by the occurrence records.The outcomes of these models should therefore always be viewed with caution and might not represent the full extent of the actual or potential distribution of a species. This is a general drawback of a modelling approach, as a model is always only a representation of the real world.

You can also view this information in Module 2 of our Online Open Course in SDM: https://app.bccvl.org.au/training